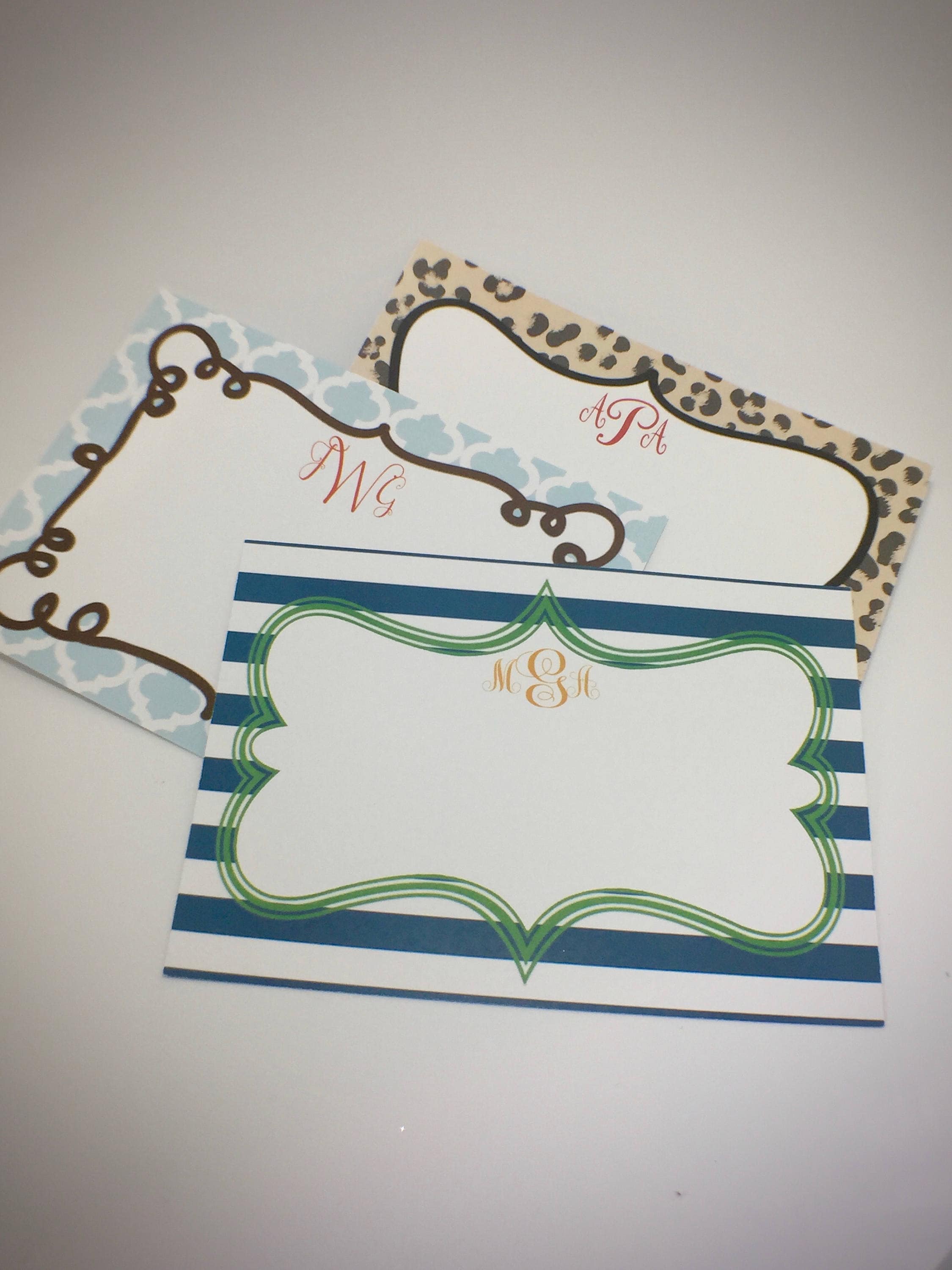 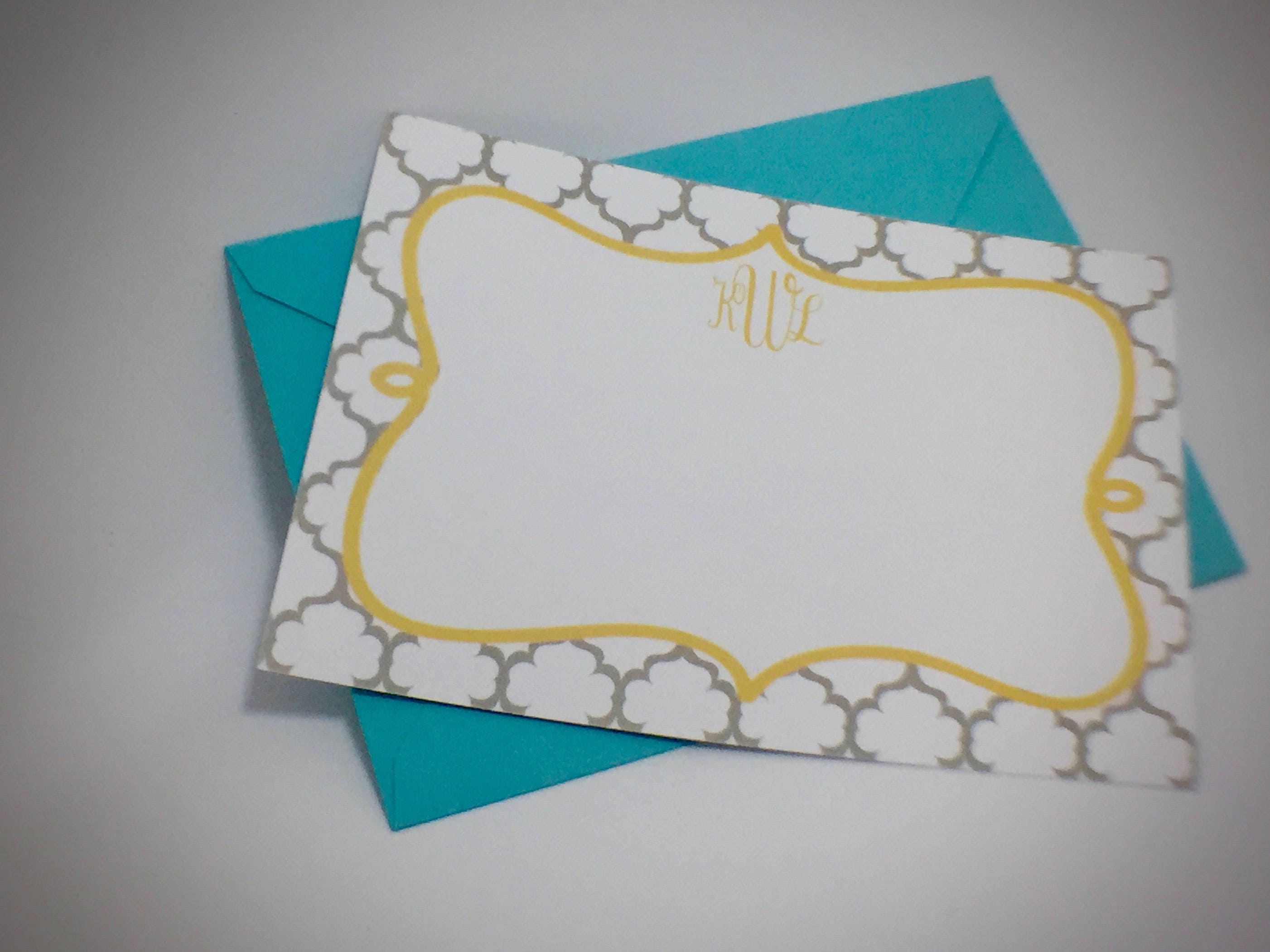 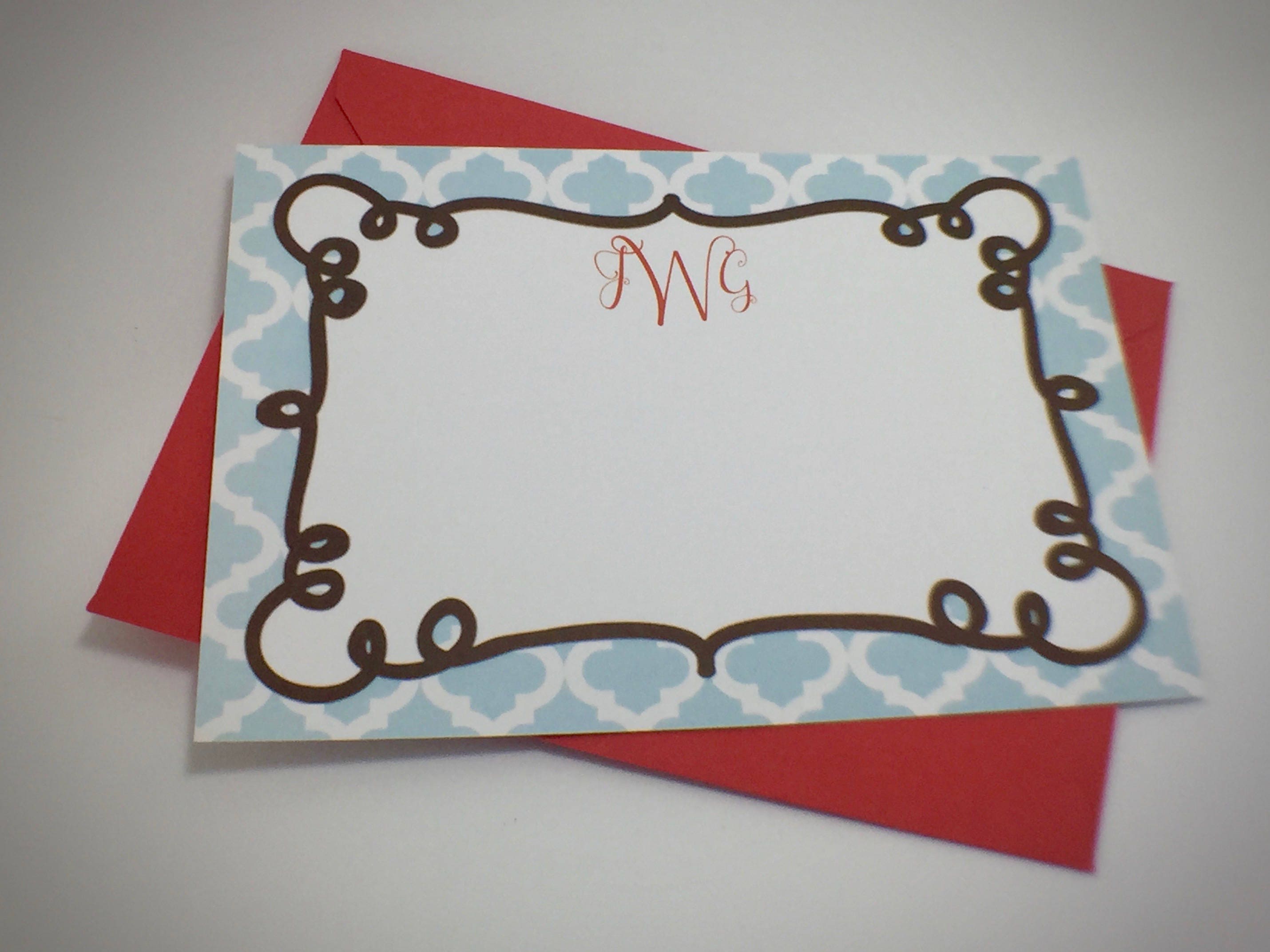 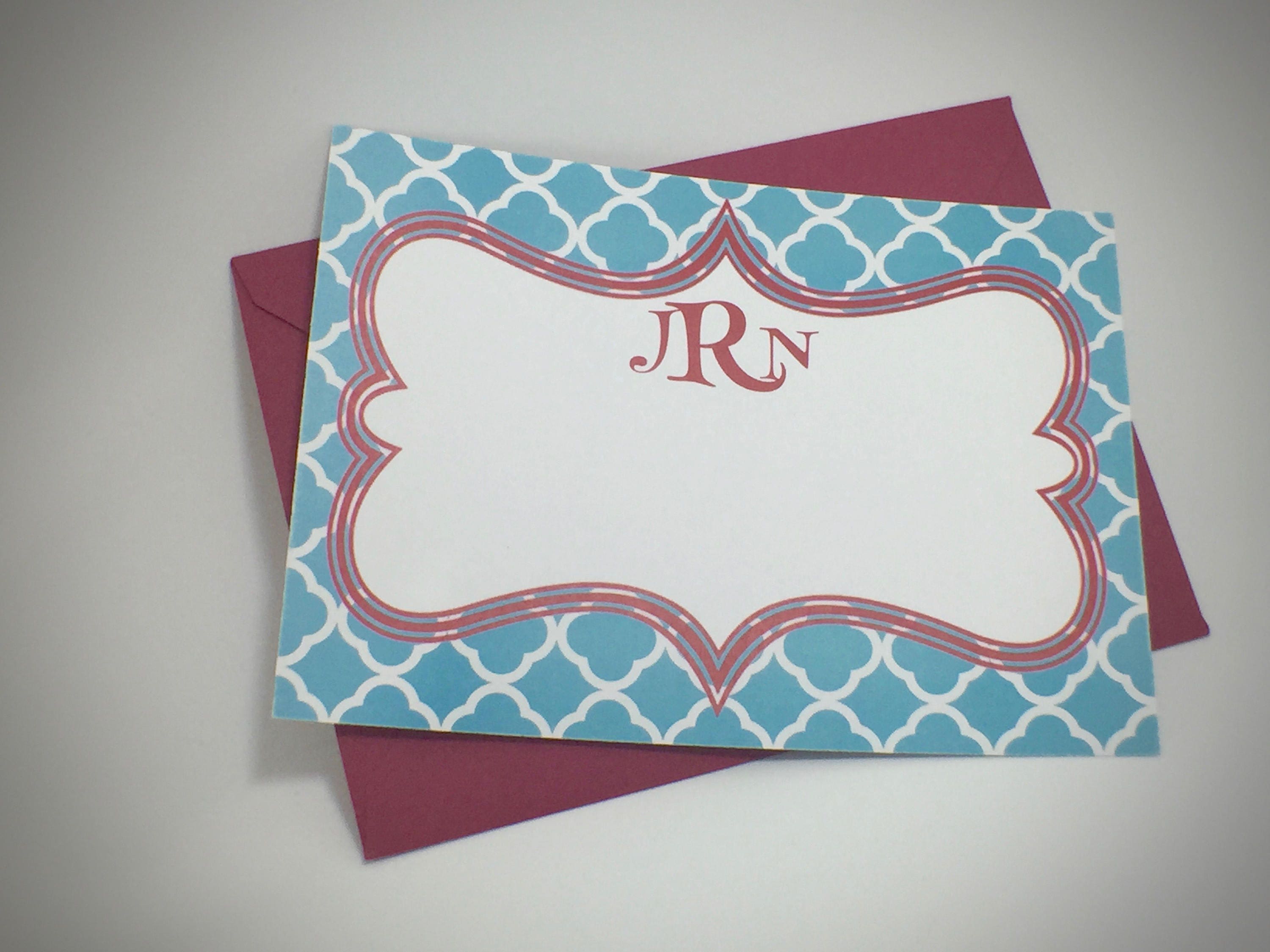 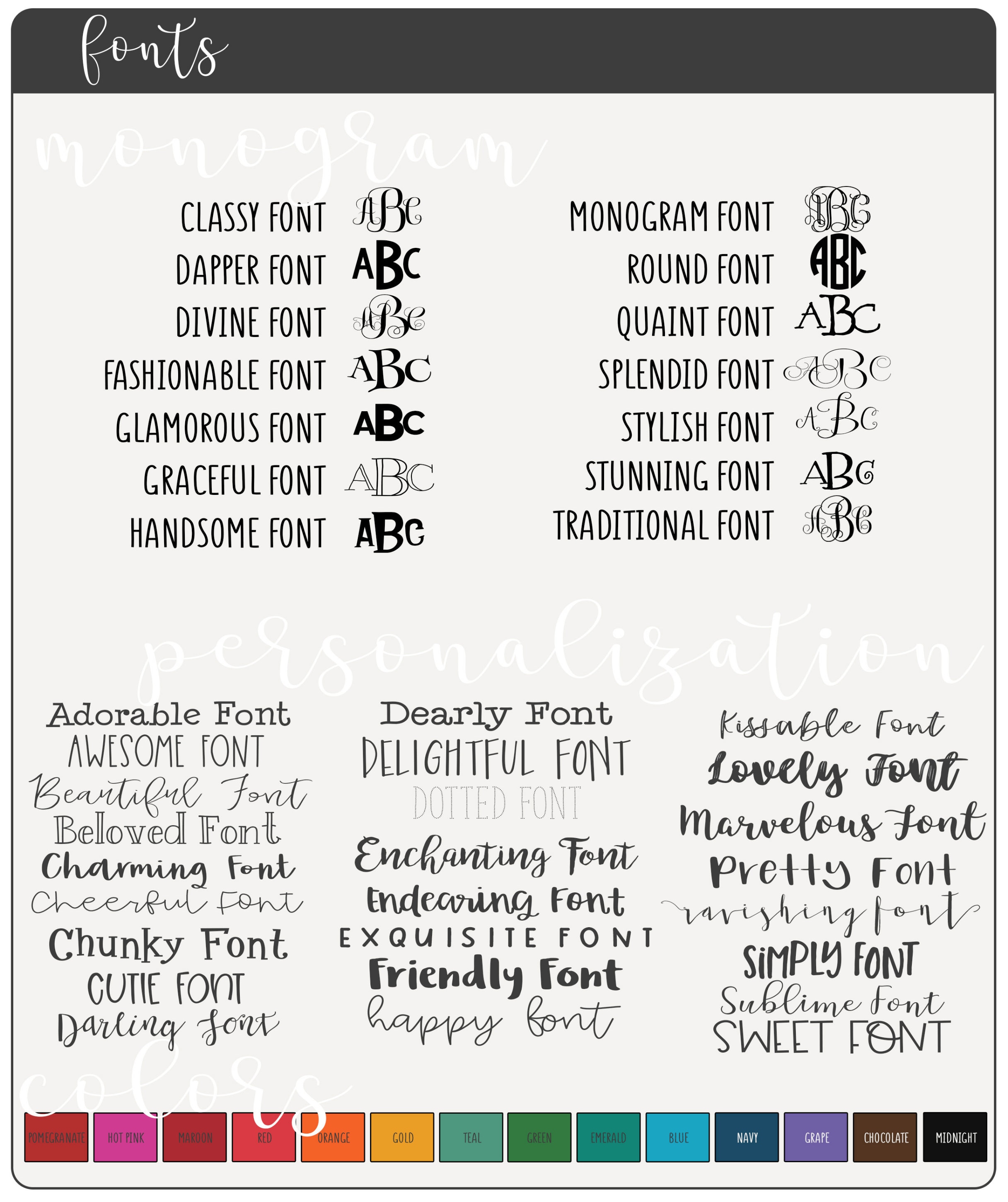 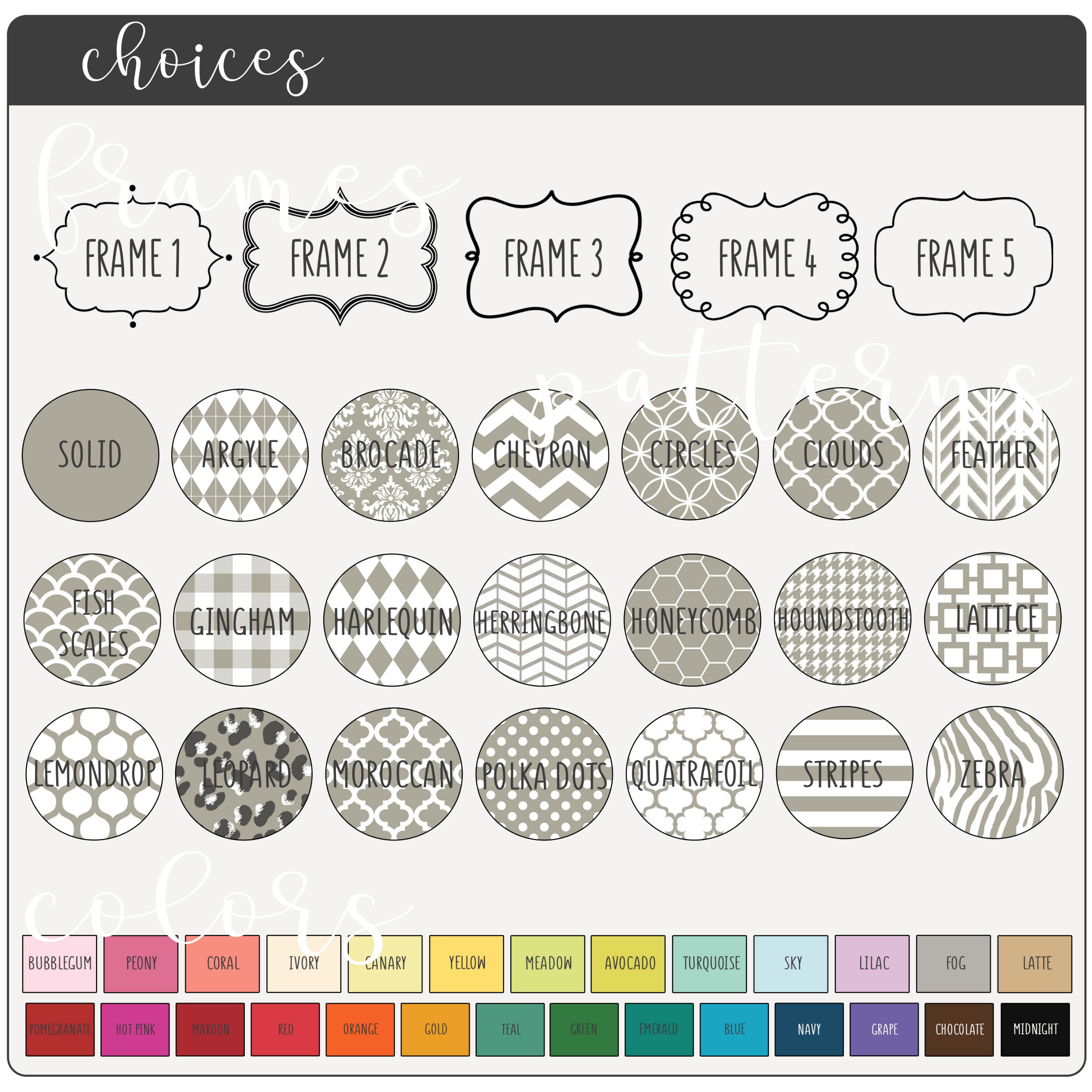 When ordering, please enter your selections for the frame & background pattern for outside the frame from the drop down menu. Then, copy and paste the list below in the comments box and fill in the information.

A proof will be sent to you via Etsy convo within 48 hours (usually sooner) pending your approval to print. All ten note cards will have the same artwork, font, and all will be printed on white or cream card-stock.

Here are a few general guidelines for monogramming to make it easier for you:

For a Married Couple (or soon to be):
The monogram will contain the bride's first initial, the surname of the couple, and the groom's first initial, in that order. For instance Rebecca and Andrew White would be: rWa

Monogramming a Gift for a Woman:
A monogrammed gift for a woman should include her first, middle and last initial or if she is married, her first, maiden name, and married name initials. Traditionally, a woman's monogram is presented in first, last, middle initial order. So for Jessica Cailin Parker her monogram could be as follows: jPc
Tradition dictates that a woman's maiden initials are always appropriate to use, even after she is married. However, it is more common to use a woman's first, maiden, and married surname initials once she is wed. For instance, if Jessica married Anthony Dalton, her new monogram would be: jDp

Monogramming a Gift for a Man:
When monogramming something for a man, many people prefer to use the initials in the first, middle and last order and keep them all the same size. This letter format is often found on personal items such as briefcases, luggage, shirt pockets and cuffs. For these kind of items, Benjamin William Rogers would be: BWR

It is also correct to put a gentleman's surname initial in the middle. For Benjamin that would be: bRw

Monogramming Gifts for Children:
The same monogramming rules apply for children as for adults. Gifts for small children, both boys and girls traditionally follow the first, last, and middle initial order. For example, both Sarah Amelie Whitlow and Stephen Andrew Whitlow's monogram would be as follows: sWa

As Stephen Andrew Whitlow grows older, it will become more appropriate to move to the first, middle, last initial order for his monogram: SAW

Credit & Debit Cards through Etsy checkout; PayPal
Please be respectful of other buyer's orders and do not request a proof without first placing and paying for an order.

Your custom notepads, note cards, stamp, tumbler, snack container, key chain, or luggage tag will then be ready to ship in 5 business days. Mousepads, clipboards, marker boards, laptop cases, coasters, and tablet cases may take up to 2 weeks to produce. Please allow time for shipping, as well. If you have any further inquires please contact me. ***If you need an item faster than the time frame above, please ask to upgrade to Express Mail and I will communicate the additional rate. A custom listing will be created just for you that will include the USPS Express Mail Rate.***

If you order on a Friday or weekend day, please be aware that your proof will be sent on Monday or the first business day of the week.

All orders will be shipped using United States Postal Service.

If you live in the north Dallas area and would like to arrange a pick up with no shipping, use the coupon code "LOCALPICKUP". I will contact you when your order is ready for you to stop by and pick it up.

*** In the event that a package gets lost, please contact me promptly and we will come up with a solution or work together to find it or replace it if needed. Please check with your local post office or mail carrier about how packages are delivered, I also use USPS tracking to track my shipments to confirm you receive them***

Ship items back to me within: 30 days of delivery

I don't accept returns or cancellations

But please contact me if you have any problems with your order.

The following items can't be returned or exchanged

Because of the nature of these items, unless they arrive damaged or defective, I can't accept returns for:

I'm sorry but as a general rule, due to the nature of most of what I make in the shop, there will be no refunds on purchases, as most items are personalized and person specific. However, under some circumstances such as damage in the mail, or loss I will consider replacement. Please let me know of any problems or damages promptly so that we can come up with a solution! Again, I always want you to be happy with your purchase.

*As stated in my listings regarding printed cardstock. Colors on your computer screen may not be exact and may slightly vary from my listing/pictures. This type of "problem" will not be refunded. I do my very best to show colors as close as possible.

Need 5 or more luggage tags for bridesmaid's gifts? A lot of notepads for teacher gifts? Or your company would like to order bulk thank you cards? The Mad Padder can help! If you have a large number of items to order, please contact me and I'll create a custom listing just for you...and also include a discount!

0 items in your cart